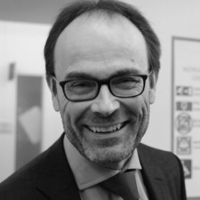 Juha Heikkilä joined the European Commission in 1998, and since 2014 he has been the Head of the Robotics and Artificial Intelligence unit in the Directorate-General for Communications Networks, Content and Technology, which develops and coordinates the Commission policy and activities in Artificial Intelligence. The Commission has been funding a multidisciplinary programme on Cognitive Systems, Robotics and AI since 2004, focusing on smart and flexible robots and artificial systems, and in 2014, it set up a Public-Private Partnership in Robotics, bringing together all the key European stakeholders. Previously, he was involved in computational and corpus linguistic research at the University of Helsinki, and he has a PhD in Linguistics from the University of Cambridge.